When KP Builders was presented the job of transforming an old space into the corporate headquarters of Mr. John, we got to put our talents to superior use.  Along with the collective minds of the owners of KP Builders and Mr. John, we were able to build an incredible space that reflects Mr. John perfectly.  The project included preserving the concrete beams so that we could keep them exposed.  Exposed beams and stained concrete kept an industrial feel to the project.  From the storage container walkway, to using another storage container as the elevator shaft, the Mr. John personality shines through.

KP Builders was hired to transform a former grocery store into a strip mall.
We believe the before and after photos speak for themselves. 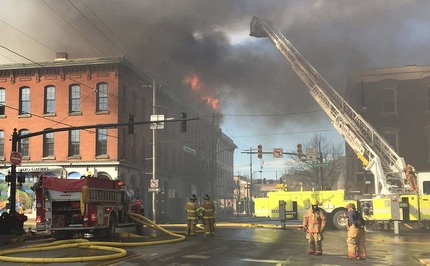 On March 17th, 2015, a small fire broke out on West Spring Street in Titusville PA. The next day that same fire reignited and spread to the neighboring building, the Town Square. The Town Square is considered the heart of Titusville. The recently renovated four-story brick complex contained elevators, a beautiful atrium, offices, and the Blue Canoe Brewery. This was not just any structure. It was a symbol of unity, and of where the town was heading. The fire didn't just affect the owners in the building, it hurt the entire town.

After the disaster, the owner of the Blue Canoe Brewery, and other owners in the building planned to reopen. From the beginning, both the owners and citizens knew it would take a lot of work, but their determination makes a statement about how much the building means to them.

KP Builders has been hired as an outside contractor for the job. Since reconstruction began, KPB has worked extremely hard to ensure the building is returned to its former glory. The first step in this process was to rectify the structural damage from the fire. This was not an easy job to say the least. After that, a new roof was required. KPB handled this with professionalism and efficiency. Throughout this entire project, it's been a race against the clock. The citizens of Titusville are desperate for the Towne Square to reopen. KP Builders has risen to the challenge.

KP Builders efforts over the past few months have yielded spectacular results. When the tragedy occurred  the people of Titusville believed it was the end of the historic building. Through determination, communication, planning, and teamwork, the Towne Square is well on its way to recovering its former glory.
Powered by